John Jay Fitzgerald Johnson, AKA Grandmaster Jay, is the leader of the Louisville based Not F**king Around Coalition, a black radical militia group. At a September 2020 rally in Louisville, just before the Kentucky Derby, Johnson was accused of aiming his rifle at five law enforcement officers, including a Secret Service agent and an FBI agent. Johnson was charged with wanton endangerment. Officers searched his home in West Chester, Ohio, and agents seized six assault-style rifles, ammunition, rifle magazines, and body armor. He was indicated in October 2021 for his crimes and plead not guilty. He served in the Virginia National Guard before enlisting in the Army, where he served from 1990 until 1997, when he was honorably discharged. Johnson re-enlisted in 1998 but went through a court-martial trial and was discharged under “other than honorable conditions.” Despite that, Johnson was able to re-enlist in December 2003 in an administrative role. The FBI is investigating whether Johnson committed fraud in order to re-enlist. By 2005, he was placed on AWOL status and classified as a “Deserter/Absentee.” In 2006, he was again formally discharged "under other than honorable conditions". Normally, people discharged from the military under less than honorable conditions are forbidden to own guns. Johnson claims to have worked as a rapper, DJ and producer and appeared in an online ad for a DJ system. A tape from another DJ was allegedly dubbed over Johnson's performance. https://web.archive.org/web/20211024030627/https://thepostmillennial.com/leader-of-blm-paramilitary-group-indicted-by-kentucky-jury-for-allegedly-pointing-rifle-at-police?utm_campaign=64470 https://archive.vn/coupW https://www.youtube.com/watch?v=JhsGrnvyT_4&ab_channel=WHAS11 https://www.youtube.com/watch?v=yvhFcr9mPBQ&ab_channel=MSNBC https://en.wikipedia.org/wiki/Not_Fucking_Around_Coalition Johnson was convicted in 2022. 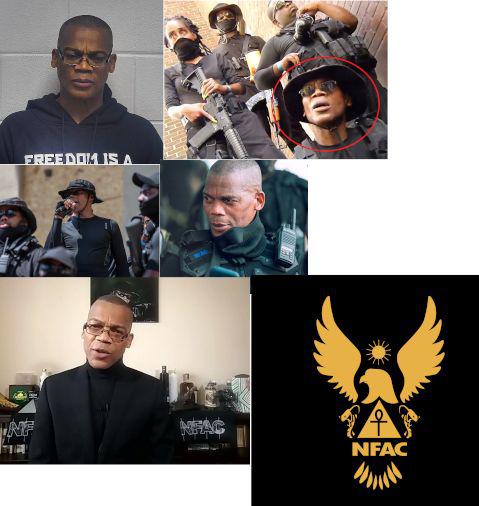