Nunez allegedly participated in the violent counter-protest to the 2017 UTR rally. She's a member of the religious LGBTQ group SOULFORCE and was arrested in Orlando in early 2017 along with Alba Onofrio, aka "Reverend Sex" (https://antifawatch.net/ViewReport/8027b746) when they attempted to disrupt a meeting of the National Religious Broadcasters. Nunez served as an officer of the International Lesbian, Gay, Bisexual, Trans and Intersex Association. She graduated from the University of Richmond and was one of the LGBTQ students chosen to speak at the 2014 graduation. https://archive.ph/OB1a1#selection-5875.6-5875.19 https://archive.ph/CAOAF https://archive.ph/ooZPQ#selection-919.0-919.13 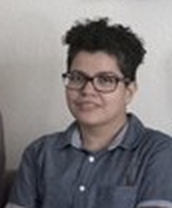