Glenn Allen Silbersdorff (DOB: 05/26/78) was arrested at a 2017 May Day riot in Portland. Silbersdorff was also active with Occupy Portland in the early 2010s. Some media sources claimed he was working as a teacher but he actually works in road construction. His current address is unknown but he was living in Portland as recently as 2018. He has ties to the Spokane, Washington. https://archive.ph/O1KHW#selection-1331.253-1331.271 https://archive.ph/P8VvC#selection-1733.2-1733.26 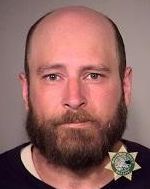